⭐️ Rating: 4/5 Sagely advice that is written in an engaging and highly consumable form. 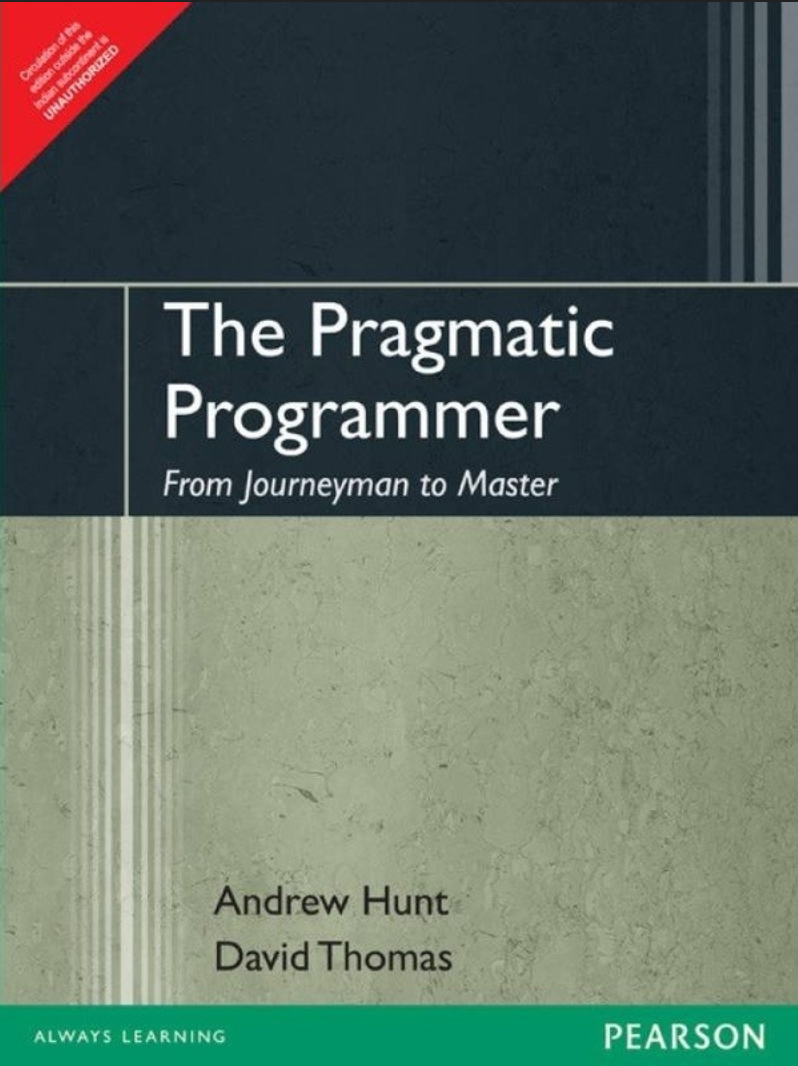 The Pragmatic Programmer is a very good book full of practical advice. It's written with little Tip boxes which are the tl:dr; of a particular section. Plus, there's a healthy sprinkling of Dad jokes throughout the book 😁.

Unlike, a Mythical Man Month, I would recommend this to seasoned professionals as well as newbies. Though this also has a lot of content for the seasoned professional, it is much easier to parse. Instead of having long anecdotes about long since dead technology to gleam the lesson, this book is to the point, with helpful tip boxes, exercises and the examples are mostly relevant to today.

❗️ Some criticisms of the book: #

Whilst I agree with the principle, the accompanying pages advocate for the creation of mini languages in order to get closer to the domain. The project manager senses in me (I am not a project manager) can see this quickly becoming a rabbit hole distraction where developers end up on an academic pursuit of these mini languages, the necessary language parsers, documentation etc. The suggestion to create languages for all makes me cringe,

There's the end user, who understands the business rules and the requried outputs. There are also secondary users: operations staff, configuration and test managers, support and maintenance programmers, and future generations of developers. Each of these users has their own problem domain and you can generate mini-environments and languages for all of them.

I've not observed anyone creating a mini-language during a project. What I think is more practical and occurs in real-world projects is creating packages of functions whose scope is limited to a particular domain. Such that the ontological representation, the digital recreation of real world concepts happens with a set of classes and/or functions that map to the domain.

This chapter discusses tools that a pragmatic programmer should have in their tool kit. Inevitably the technological tools have changed in the intervening years. Well, eMacs and Vi are still around, but the recommended plugins etc. are out of date. If you don't have a good toolset already, I'd recommend going through MIT's The Missing Semester of Your CS Education.

✅ Major (Useful) Points of the Book #

⚖️ Involve Your Users in the Trade-Off #

It's quite a common occurrence for technical people when asked by a stakeholder to feel anxious or pressured to provide an estimate of when something can be done on the spot. For a particular data request, this might mean involving the stakeholder in the tradeoff between how accurate vs how quick the deliverable's turnaround is.

Don't repeat yourself (DRY) is a commonly held maxim of programming. The Pragramatic Programmer exposits the common causes for duplication. This can arise from multiple places, project requirements, multiple target platforms, multiple programming languages being used in one system, laziness etc. A programmer may have to duplicate the schema of a database table to represent it as a class in their program. Documentation in code as comments and as a separate accompanying document. But these can be duplicative of each other.

good code has lots of comments

☝️ A slight digression from DRY, but this go-to book for the industry is in favour of lots of comments in code. I've come across a few developers who like to argue the code is documentation. But code will never tell you why the code has been written this way, or the trade offs considered in choosing a particular approach. I've never heard anyone complain 'there are just too many comments in this codebase'.

With all rules there are exceptions and trade-offs with DRY.

I know orthogonality as modularity or decoupling. A great example of modularity is the way unix command line was designed with lots of modular tools that you can chain together using | pipes.

There are two main benefits of orthogonality increased productivity and reduced risk.

Better known these days as 'agile development', 'MVP' and 'iteration'. Tracer Bullets are discussed over several pages. Most people could probably skip this as the doctrine of Agile has mostly replaced Waterfall.

Involve your users and ask if they need high accuracy or a ballpark figure for the estimate. First understand the problem space, this will involve working with your user to understand not just what they are asking, but what their actual problem is. Then whiteboard what the system is you will build to solve it. If this is large enough a system, then estimate how long each component could take to build. Keep track of this estimate so you can track the accuracy of your estimates. As you go through each project iteration (sprint) update the estimate based on any change in delivery schedule that may now be apparent.

A fun fact from a footnote:

Lastly, when asked for an estimate you say, "I'll get back to you".

This is a good chapter and great if you're new to tech. The first rule of debugging:

I've done this, and seen others do it. But it really is counterproductive. Take a deep breathe 🧘‍♀️, and approach it with the Zen of a master. This will help avoid the myopia of jumping on fixes for the symptoms that you immediately see rather than taking a step back to assess the bigger picture here. This is something I usually call, developing hypotheses of the root causes or, what are the possible solution paths we could go down - it's best to get a range of options before jumping down one that could prove fruitless. Instead, rank the hypotheses in order of most likely, then proceed with the highest ranked hypothesis.

The book talks about Java Object Oriented examples. However the principle applies to all code. Does your code return the expected data with the expected types? Does the logic do what it promises to do? Include assertions, tests and document assumptions. An example of the principle applied to a data pipeline where each model is some Spark or SQL code A -> B -> C. The final select of model A uses SELECT * or SELECT *EXCEPT(x,y,z) this is not enforcing model A's side of the contract. When model B consumes from model A, if similar shorthand SELECT * is applied, you can end up with a minor code fix that introduces a new column, changing the schema of tables flowing right through this simple pipeline all the way to model C. This can be easily avoided by explicitly naming the columns to be returned such that downstream models won't accidentally have their schemas changed by an upstream model. Even better, enforce the contract when you select columns from an upstream data model.

Tip 33: If it can't happen, use assertions[or tests] to ensure that it won't

The book uses the example of making a cocktail and all the tasks that are required from 'open blender' to 'get pink umbrellas'. If you analyse all of these tasks, some are dependent on others to complete. But many tasks are able to happen in parallel to another task. Diagrams can help design for concurrency.

Code needs to evolve. It is not static. And unfortunately many people perceive software as done once it is delivered. Software is more like gardening - you might start a gardening project with a plan, plant seedlings according to the plan, but later some plants didn't like the soil others have overgrown. You monitor and regularly tend to the garden to keep it at its best.

These are common qualifiers:

If time pressure is used as an excuse from management, explain technical debt is like a cancer that grows and is riskier and more time consuming to remove the longer you leave it.

To understand what the user needs:

Tip 52: Work with a user to think like a user

If you have the problem of too many requirements, then point out how much each suggested requirement is going to increase project delivery by.