A how-to in getting started with Package Management in R

The problem: Let's say you coded a project in R in 2014 using the package dplyr and you called the project 2014project. Over time packages get updated, sometimes changing syntax and function names, let's say some major syntax changes occurred in 2015 to dplyr and you used the latest version of dplyr in other projects in 2015. Now you come to 2016 and you want to re-run the code in the 2014project, but you find a bunch of errors because in 2015 dplyr had those syntax changes, such that the syntax you used in 2014 no longer computes. Now for the solution...

R scripts breaking over time is annoying for anyone, but it's worth highlighting that organisations using proper package management will significantly decrease their costs in the form of maintenance time spent by developers, data scientists and data analysts fixing projects broken due to changes in package dependencies. In contrast to the Python community who seem very familiar with their virtualenv package management, the R community doesn't seem to have widely adopted the practice. In the data science world, I attribute this difference between the R and Python communities to Python coming out of the computer science discipline and R coming from the statistics discipline. If you are an organisation heavily using R, you have a lot of productivity to gain from the adoption of package management by your R developers.

To get the RStudio niceties/integrations it seems neccessary to treat your project folder as an R Project. I've created a new project /testpackrat2 and with the latest RStudio you should be able to select both git and packrat to be initialised. This runs the packrat::init() function to enter packrat mode, takes a snapshot of the package dependencies (of which there are currently none) and places the binaries in the project folder under testpackrat2/packrat/src/; finally init() runs restore() to apply the latest snapshot to the project folder. R will restart once this process is finished. 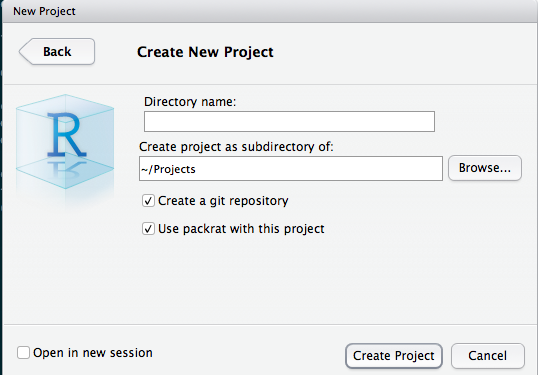 To double check packrat has been initialised properly run:

You should also notice the RStudio integration in the packages area, where it will show your project version against that which Packrat has the binary for and the source of that binary:

For test purposes I created script.R with only one package.

If I open script.R in RStudio and try and load the library this is the expected behaviour:

I have stringr installed on my system, but now I am in an isolated packrat project which is only reading from the project folders list of packages. Now to run the packrat commands to snapshot() the addition of stringr to the project and install it ready for use in the project.

It's probably worth pointing out what packrat is doing to your library path, particularly when you go to install new packages in your project.

So as long as you are in packrat_mode, when you run install.packages() or remove remove.packages() it will only be modifying the project testpackrat2/ folder.

I want to test the scenario where I have existing projects using old versions of packages. To do this I ran:

I then created a folder with these packages, to simulate an old project that I want packrat to manage. 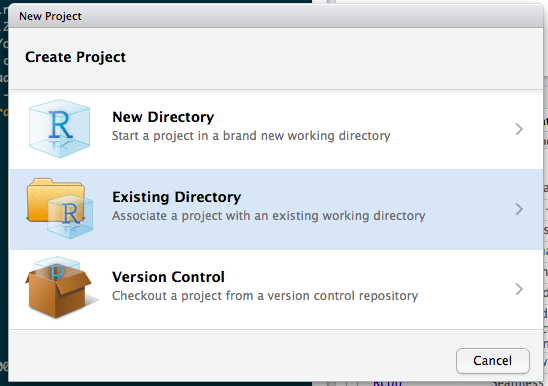 Unfortunately there is not an option to init packrat as part the process. So...

Ok great, it fetches the old binaries. Now let's test upgrading these packages and then reverting back to the initial project state.

So it seems packrat auto snapshots the project, such that I couldn't run restore() and return to htmlwidgets v0.6. Let's try that again without autosnapshot and with my out-of-date lubridate:

buy me a coffee

By default packrat auto.snapshot my project when I updated a package. Crucially, this meant I could not use packrat::restore() because I was already up to date. Of course, if I had been using git and making commits before and after, then there wouldn't have been a problem. However, without git, running packrat::restore() to downgrade a package requires the overwrite.dirty=TRUE option and only seems possible if you switched off auto.snapshot. I'd highly recommend turning it off anyway, as the manual update will allow for a better understanding and control over packrat.

Aim: To use GNAF (Geocoded National Address File) data to display the adminstrative boundaries (e.g. States) on top of Open Street Maps. Additionally, I want the user when hovering over a state to see summary statistics. I want an Australian version of this.