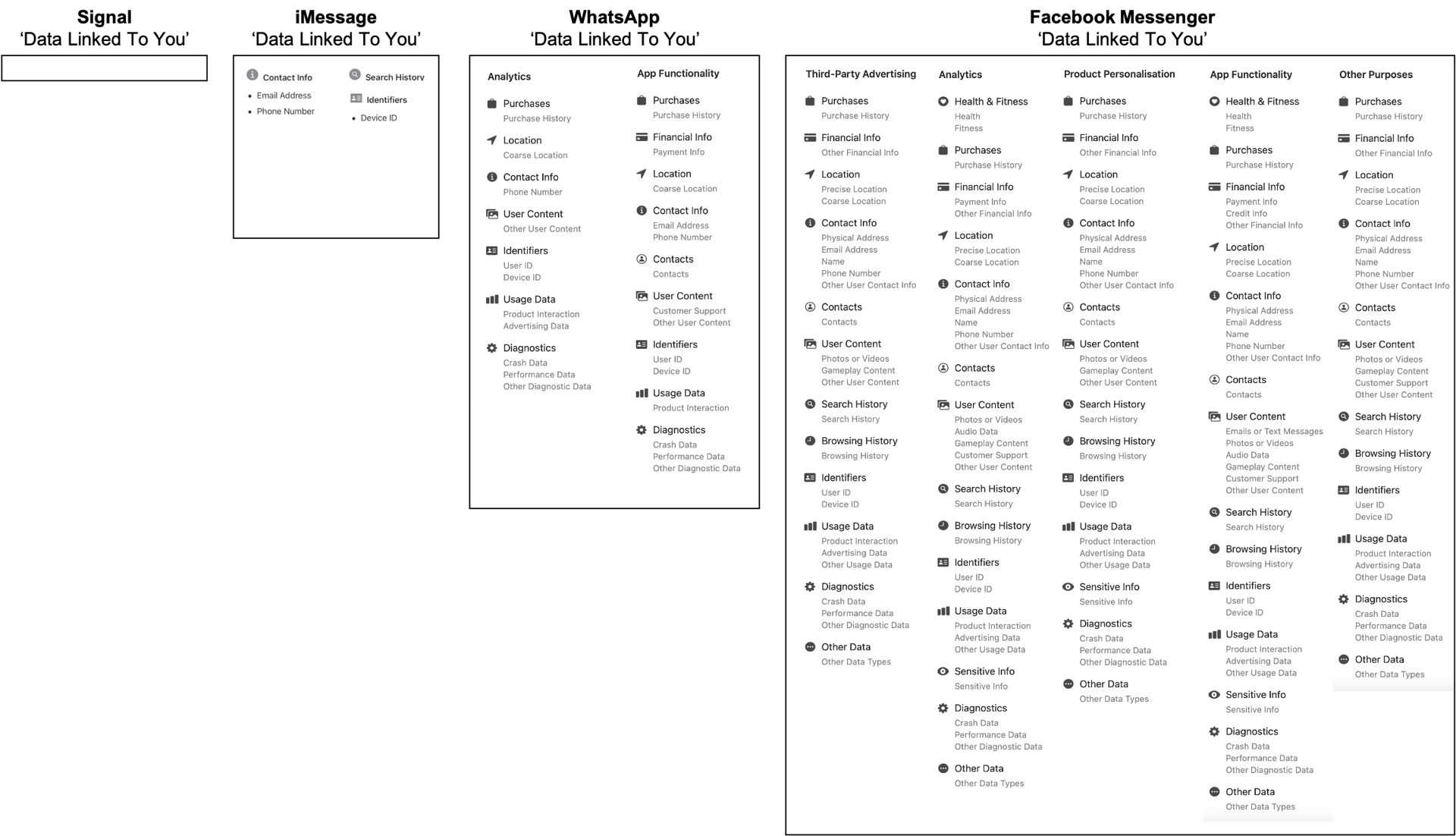 Anyone who uses Whatsapp would have seen the ultimatum Facebook is handing its users. The summary is, give us your data or don't use our platform, you have until the 8th of Feb 2021. The choice is very simple for me; Whatsapp has been something I have reluctantly used ever since it was bought by Facebook. However, not everyone in my network pays attention to privacy or values it as much as I value it. Reasonably my friends and family ask 'but why should I stop using Whatsapp?' or 'but everyone I know is on Whatsapp'. These are great objections. In this post, I'll explain why I'm moving and hopefully tackle some of the common objections I've had.

In 2014 Facebook bought Whatsapp for $19 billion. This was not out of charity. The intention was always to integrate the valuable data on you and monetise this huge purchase.

Facebook's primary business is collecting and storing as much data about you as possible, to build complex models that most people don't understand - including the data scientists working at these companies. But that doesn't matter as long as they can optimise keeping your eyeballs on their products, they can sell your attention to whoever wants to buy it, from consumer product companies to people trying to manipulate election outcomes.

The worst result of Facebook's giant panopticon on the world is the undermining of democracy. Russian influence on the US 2016 election was confirmed by intelligence agencies. Within the US the Trump campaign utilised Cambridge Analytica to profile American voters using Facebook - providing them the information on who to target i.e. which Facebook bubbles. From here they launched a wholesale disinformation campaign using Facebook. In Brasil at the inauguration of Bolsonaro the crowd cheered 'Facebook Facebook Facebook' and 'Whatsapp Whatsapp Whatsapp' - they were crediting these platforms for the win, which had a wealth consortium funding a massive fake news campaign. The examples to list are too long. Facebook empowers authoritarian movements. An analysis of a UK government inquiry, put it well

One way to do that is by not using its platform or the platforms it has purchased, like Whatsapp, to further increase its power. But, in typical Orwellian fashion, it will try everything to stop you from leaving, from paying for ads on the app store to be the first result when you search for 'Signal', to texting you to come back.

❓ Why Signal and not something else? #

Here's what Signal had to say:

Some quick facts about us: we are an open-sourced nonprofit organization whose mission is to bring private and secure communication to anyone and everyone. One of the reasons we opted for organizing as a nonprofit is that it aligned with our want to create a business model for a technology that wasn’t predicated on the need for personal data in any way.

As an organization we work very hard to not know anything about you all. There aren’t analytics in the app, we use end to end encryption for everything from your messages and calls/video as well as all your metadata so we have no idea who you talk to or what you talk about

Despite what Zuckerberg might say publicly, it is deeply embedded into Facebook's DNA to get your data and sell it - it is not there to offer you privacy or the best private messaging service; that's an afterthought. As with this update to the t&cs they are demonstrating that they can change the rules whenever they like to what they most prefer - more of your data. A tweet revealed a subtle change of Whatsapp's end-to-end encryption paper, which is a little concerning:

Yes that's right, the co-founder of Whatsapp gave $50 million dollars to Signal, its competitor. Why? He regrets selling to Facebook; when the Facebook Cambridge Analytica scandal happened several years back, he tweeted 'It is time. #deletefacebook'. Both Founders ended up leaving over disputes of monetisation. And now it's time to delete Whatsapp too.

Ok, this is more to relay a funny anecdote. The following tweet,

Led to a 1,100% surge in unrelated stock with a similar name. But in all seriousness, Elon does have a knack for doubling down on what the future technologies are going to be.

💬 But my network/group chats are on Whatsapp #

And people are moving in droves - just have a quick search on the net. The top downloaded app in several countries right now, is Signal. 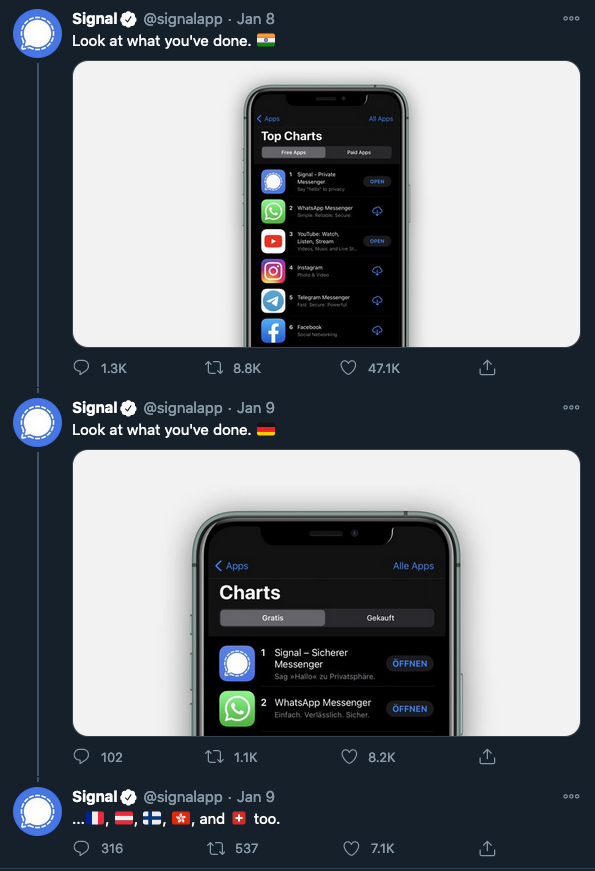 We've all done this before. In my lifetime, I've moved through the following for messaging:

📱 Signal takes up too much room on my phone #

This is the same for Whatsapp. The chunky content you receive like files, videos and voice messages can be cleared out on either app.

🔎 I've got nothing to hide, Facebook can have my data #

Handing over our data to this giant profiling machine is aiding the corrosion of our democratic societies.

The huge swaths of data allow for incredible levels of targeting. The more privacy and data you give up, the more targetable and manipulable you are. 'But I'm not influenced by ads' - sadly you may not be aware of it. 93% of Americans believe they are in the top 50% of drivers - this is illusory superiority. And based on the analytics, you and I very much are influenceable. Even if you are unmovable, frequently it's our friends unintentionally giving up our data; uploading photos of us, tagging us, and merely being a part of your network allows data scientists to make highly accurate guesses about who you are.

'We have created tools that are ripping apart the social fabric of how society works'
-Chamath Palihapitiya, former head of Facebook’s user growth team

😐 I won't make a difference if I move, I'm just one person #

This a paradox of voting and an apathy towards action. The argument is made when it comes to voting and democracy. If everyone believes it won't make a diferrence and doesn't vote, then the one dictator who wants to take power can walk down to the ballot box and cast that one vote and take control. An extreme hypothetical, but the point is, you might not feel like you make that much of a difference but collectively we make an impact.

🙃 I don't want another app on my phone #

This argument is pretty lazy but I have had it. We are downloading apps all the time, whether it's to pay for parking, collect coffee loyalty points, play games or get in on the latest hip social media thing the cool kids are using. This is an ethical win for the price of moving your digits on that mini screen your eyes are glued to.

🤔 Ok, you've piqued my interest, where can I learn even more? #

Or 📚 The People Vs Tech

👋 See you on Signal!